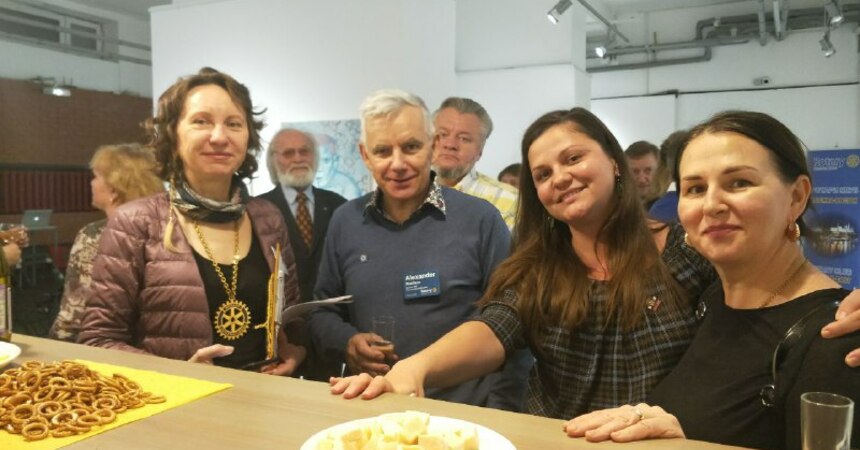 On October 28, all the people interested in world transformation had an opportunity to learn more about the Rotary Movement in Magadan.

Magadan is a port town on the sea of Okhotsk and also one of the towns forming part of the Rotary Organisation...

On October 28, all the people interested in world transformation had an opportunity to learn more about the Rotary Movement in Magadan.

Magadan is a port town on the sea of Okhotsk and also one of the towns forming part of the Rotary Organisation in Russia, the “Moscow-West” Club. First steps towards organising major social projects Magadan made back in in the 1990-s: with the help of neighbours, Rotarians from Alaska, the Rotary Youth Club “Rotaract” organised a New Year performance at an orphanage in Magadan. That is how the history of the Magadan branch started.

“Moscow-West” is an inherent part of the global network “Rotary International” which primary objective is to make people live in a better world through the actions taken by business and community leaders. Members of this organisation have been working together to promote peace, support medical services and education, and much more throughout a long 110-year history. “Rotary international” has become a workspace for people from more than 200 countries.

The meeting about Magadan experience on October 28 was held in an informal setting, in the Omelchenko Gallery. Visitors got acquainted with the works of modern art and the specialties that Magadan cuisine could offer. And of course, thanks to the meeting, visitors learnt the most relevant facts about history and the present of the Magadan branch of the “Moscow-West” Club.

Special appreciation should be given to the founders of the Magadan branch who acted as speakers: CEO of the Magadan Community Nadezhda Papp, architect Kamil Kozaev, and Ksenia Maksyukova, CEO of the “WorldWideBridge” certification agency, co-organiser of this meeting who was one of the youngsters who visited the orphanage back in the 1990-s.

There will be more meetings in such a cosy atmosphere, as the “Moscow-West” Сlub is represented by a wide range of Russian cities and towns with their own history and flavour. The list of meetings includes such remarkable cities as Volgograd, Saratov, Yakutsk, and Blagoveshchensk, so many interesting stories are still to be told.

Keep on powering! See what’s behind the certification of industrial motors

How to obtain Fire safety certificate in Eurasian Customs Union

Certification of chainsaws for the EAEU market

EAC certification of process equipment for food, meat and dairy and fish products

Certification of Radio frequency modules in the Customs Union

TR CU 032/2013: Complete guide to obtaining a certificate or declaration for a vessel

St. Petersburg instead of Korea: Testing the equipment according to TR CU 010 (5d) at a particularly hazardous production facility

Test it up! A closer look at the testing procedure for the TR CU 017